Spain: beyond the beaches and the sun

There are many reasons that place Spain among the countries receiving the most visitors in the world. A colourful culture, traditions rooted in society, an ideal climate, beaches that become the perfect destination, an enviable historical heritage, a unique joy and the great protagonists of this article: natural landscapes where beauty is evident throughout splendour. Places that nature seem to have created to show us and remind us that the most beautiful things come from it. Today, we present you some of them that will create a unique image that will remain engraved in your memory, while showing that in addition to the sun and the beach, Spain is home to treasures waiting to be discovered.

The Natural Park of the Volcanic Zone of La Garrotxa: calm in its maximum splendour

The saying "after the storm always comes calm" makes even more sense in the Natural Park of the Volcanic Zone of Garrotxa. And where there are eruptions of incandescent lava, we now find a landscape shaped by this phenomenon that inspires calm, tranquillity and peace. It is in the Catalan province of Girona that you can admire this fascinating mix of 40 volcanic cones, 10 craters and more than 20 basaltic lava flows. The park, considered the best representation of the volcanic landscape of the Iberian Peninsula, has a protected area of ​​15,000 hectares through which it is possible to take many hiking routes in which you will have the opportunity to climb volcanoes and to feel like the master of the world for a few moments.

Contrary to what one might think, this magical place has a varied vegetation where oaks, beeches and other trees, accompanied by a rich fauna, decide to unite to beautify even more an image which, undoubtedly no one will forget.

And the best part is that this Catalan corner is less than 2 hours from Barcelona, ​​so if you enjoy a visit to the charming city of Barcelona, ​​La Garrotxa will be an ideal excursion to make your stay irreparably perfect.

>>> Discover our luxury villas on the wonderful Costa Brava

The Drach Caves: a place full of legends

In the municipality of Manacor, near the city of Porto Cristo, we find this marvel that reveals the underground wealth of the Balearic island of Mallorca. It is a group of 4 caves (Cova Negra, Cova de Lluís Salvador, Cova dels Francesos, Cova Blanca) with a depth of about 25 metres. They are connected to each other and shelter Lake Martel (named after its discoverer: EA Martel, the same man who explored these caves in 1896) which, at 115 metres long, is one of the largest underground lakes in Canada.

Its show, where stalactites and stalagmites alternate, impresses all those who have the chance to see it. In addition, during the tours, you can enjoy a classical music concert that has been held since 1935 and visit the lake in illuminated boats, which adds even more charm to the visit.
Its name, Cuevas del Dragón (Dragon's Caves), is due to the legend that there was a dragon who kept a precious treasure in this place so that pirates can never get their hands on it. This magical place, declared a property of cultural interest by the Spanish government, also seems to have conquered the great Jules Verne, who quoted it in his work, Clovis Dardentor, in 1895.

>>> Discover our magnificent villas in Mallorca 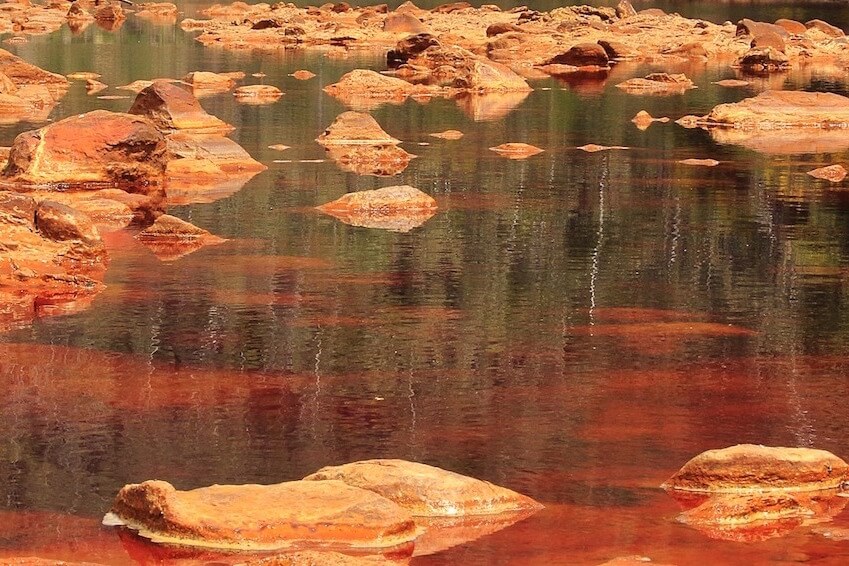 The planet Mars seems to have left its replica in Spain: RioTinto Mining Park. The mining activity that has developed for thousands of years in this place has drawn a landscape where the colours red, ocher and yellow and the absence of vegetation give a unique image to the world. It not only gave colour to this river, but also gave it its name. This phenomenon is due to the fact that its acid waters contain iron and heavy metals such as zinc and copper, among others. Despite the fact that in the beginning it was considered that life was not possible in this environment because of its bad conditions, time has shown that we were wrong. In fact, NASA is conducting studies on this place to answer all the questions that arise about the red planet.

This stream of water flows over 100km through the province of Huelva and its journey ends by joining the river Odiel. You will be able to follow its route from a train while observing the mining sites (such as what was, in the past, the largest open-pit mining site in Europe) and discover all the aspects that made this fascinating place one of the greatest assets of Andalusia and Spain in general. Click here to discover all the necessary information on fares and schedules. Huelva is waiting for you on another planet!

>>> Our luxury villas in Andalusia

The beach of the Cathedrals: natural Gothic churches

On the coast of Lugo (Galicia), the wind, the waves and the tides gave birth to a whole natural monument: the beach of Aguas Santas. This place has earned the nickname "Cathedrals Beach" because of a network of rock formations where mazes, arches more than 30 metres high, mysterious columns and caves only appear at low tide to recreate an atmosphere where the gothic style comes into play to let anyone have the chance to visit this capricious landscape without a voice. In this panorama, we must add over 1,000 metres of fine white sand, the sound of breaking waves and the visit of pretty seagulls who never seem to want to miss this natural spectacle.

The beauty and originality of the landscape have made this enclave appear year after year at the top of the ranking of "best beaches in the world". And, the fact is that visiting the most remote places of this Galician destination is one of the experiences that will contribute to what you can say, after your stay, "my trip to Spain was really impressive".

Where to find these landscapes?

Thousands more items would be needed to name each of Spain's charming places. However, these may be at the top of your list of landscapes that should not and can not be missed. Discover the most authentic Spain, a country where nature has found the most inspiration to exhibit its artistic talents. On this map you can see where these wonders are: