The most beautiful villages in Tuscany

The most beautiful villages in Tuscany

Florence, Siena, Pisa, Lucca... Tuscany is a destination renowned for its sumptuous cities, which blend art and history, its magnificent natural spaces, its traditional restaurants, and for its famous wine bars, which are a delight for wine lovers. It is also home to a series of charming villages, perched on hilltops or nestled among the verdant landscapes of vineyards, olive groves, sprawling valleys and fields of flowers. Montepulciano, San Gimignano, Radicofani, Arezzo, Monteriggioni, Castelnuovo di Val di Cecina, Montalcino... Villanovo invites you to take a stroll through Tuscany's most beautiful villages and discover the perfect place to stay on your next trip to Tuscany.

>>> Our selection of prestigious villas in Tuscany 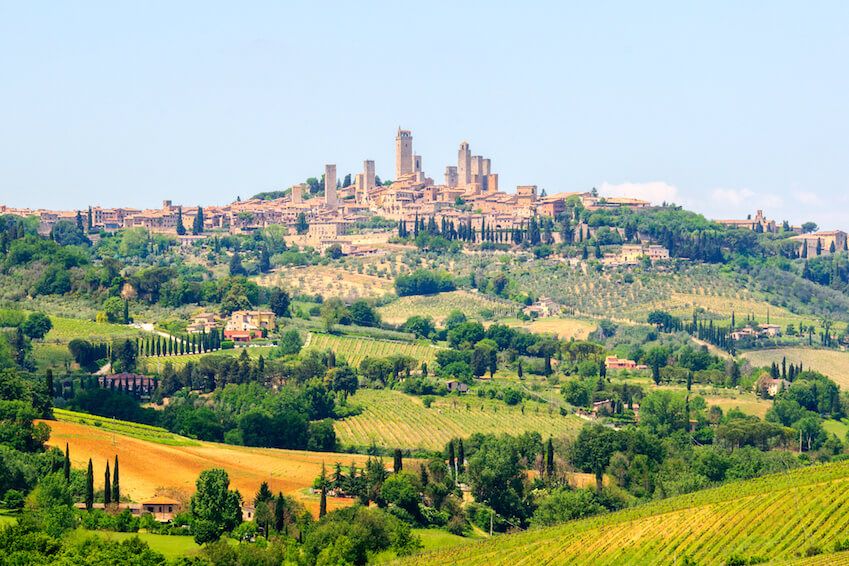 San Gimignano: the town of a thousand towers, one of the best places to visit in Tuscany

Listed as a UNESCO World Heritage Site since 1990, the beautiful village of San Gimignano stands on a hill overlooking the Val d'Elsa. The characteristic medieval architecture of the historic centre has made it famous throughout the world, characterised by a series of historic towers, built at the request of rich merchants, which still dominate the village and the Tuscan countryside. Thanks to this particular "skyline" it has earned the nickname " the Manhattan of the Middle Ages". Of the 72 towers that existed in the golden age of the town, only 15 remain today, waiting to be discovered on your stay in a luxury villa in Tuscany. The oldest of these is the Rognosa Tower, while the Torre del Podestà , also known as Torre Grossa, is considered the tallest, standing at 54 metres. Meanwhile its famous Church of Santa Maria Assunta is another favourite among visitors to the town. In addition to its major architectural heritage, San Gimignano is also known for its incredible lifestyle, the relaxing and peaceful atmosphere of the village and its surroundings, as well as its traditional local products, most notably saffron. No visit to Tuscany is complete without a stroll through this iconic beauty. 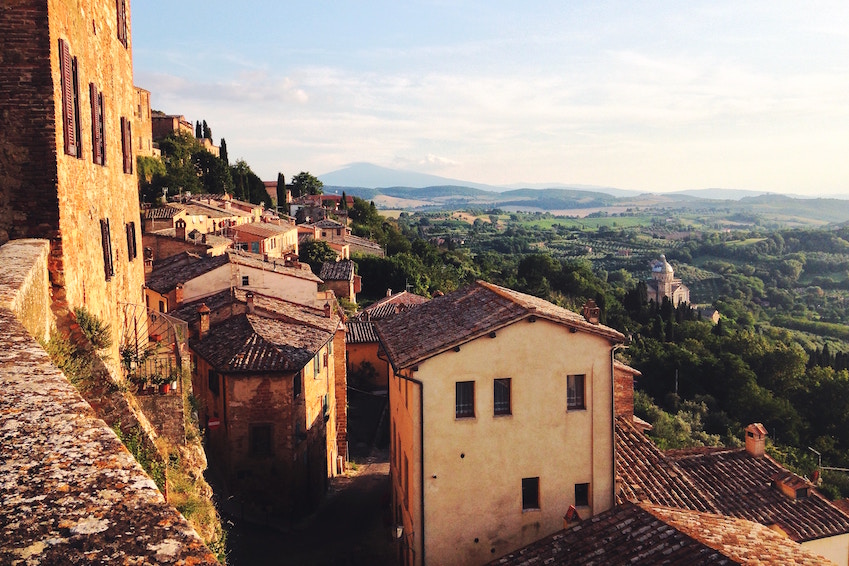 Perched on a hilltop between the Valdichiana and the Val d'Orcia, Montepulciano was historically something of a Florentine enclave in Sienese territory. It is a charming medieval village in Tuscany with origins in Etruscan times, where you can wander through a collection of Renaissance palaces, historic churches such as San Biagio, enchanting squares, all the while enjoying panoramic views of the rolling vine-covered hills of Tuscany. Montepulciano is known as the birthplace of the great Italian Renaissance poet Agnolo Ambrogini, better known as Poliziano. But it has also achieved renown thanks to its Nobile wine, one of the best Italian reds, which is protected by a controlled designation of origin. Finally, if this town in the province of Siena already looks familiar, it's probably because you may well have seen it in New Moon, the second film in the Twilight saga. The French writer Paul Bourget even described it as a village of "fierce beauty, set in its bastions with a clear design like a relief of geometry". A must-see during your visit to discover the most beautiful villages of Tuscany! 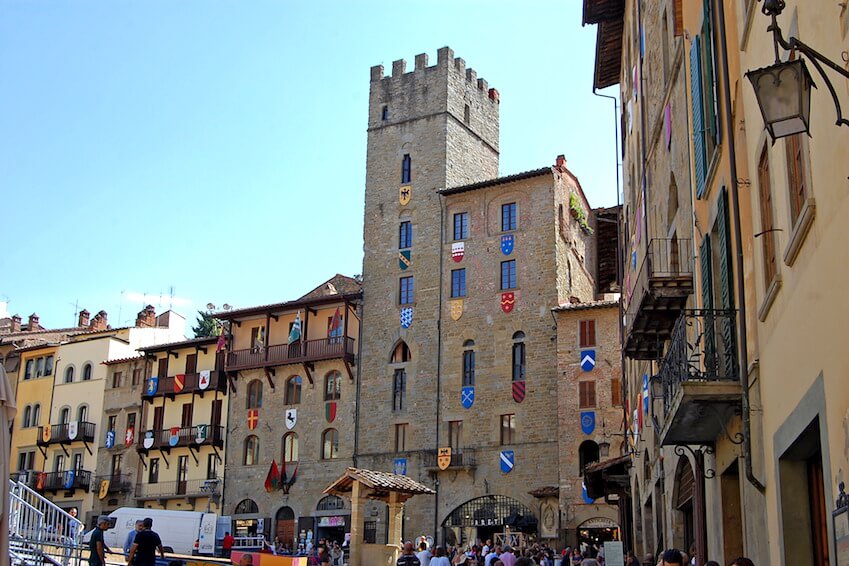 Arezzo: a quiet beauty in the heart of the Tuscan countryside

Arezzo is more of a small town than a village, but due to its superb monuments, its gentle atmosphere and its extremely rich culture, we had to include it in our list of unmissable places in Tuscany during your stay in one of our charming villas in Italy. The heart of the town, Piazza Grande, is a good starting point for exploring the town's various historic buildings, including the court, famous for its baroque style and semi-circular staircase. Stroll through the picturesque squares, wander along the charming alleys, past its ancient walls, step inside the Basilica of San Francesco d'Arezzo to gaze at the famous frescoes by Piero della Francesca. Another treat not to be missed on your trip to Tuscany.

>>> Your dream vacations in a charming villa in Arezzo 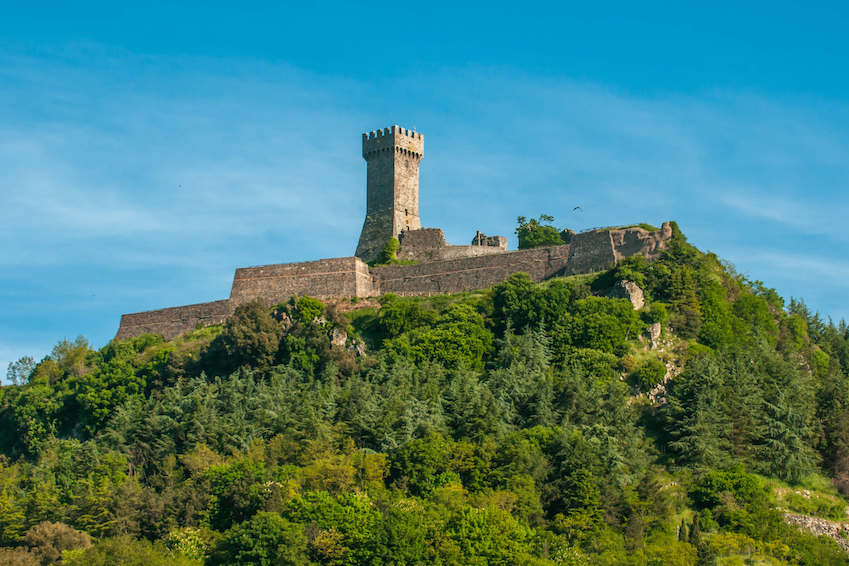 In the province of Siena, Radicofani is noteworthy for its special geographical location. This pretty medieval village sits at an altitude of more than 700 metres on a basalt hill, crowned by a fortress erected a little higher at 846 metres. Radicofani is a village with solid stone houses opening onto narrow, irregular streets. Walking through its beautiful streets and squares, you will encounter historical buildings such as the Palazzo Pretorio, today the seat of the municipality, identifiable by the coats of arms on the façade, the church of San Pietro and the church of Sant'Agata, built a few metres apart. There is also the Palazzo della Posta, a Medici villa on Via Cassia that was built as a hunting lodge for Ferdinand, and the Bosco Isabella, a fascinating garden described as "romantic and esoteric". Finally, the highlight of the visit is the Rocca di Radicofani, a 16th century fortress built by the Florentines on basalt rock. 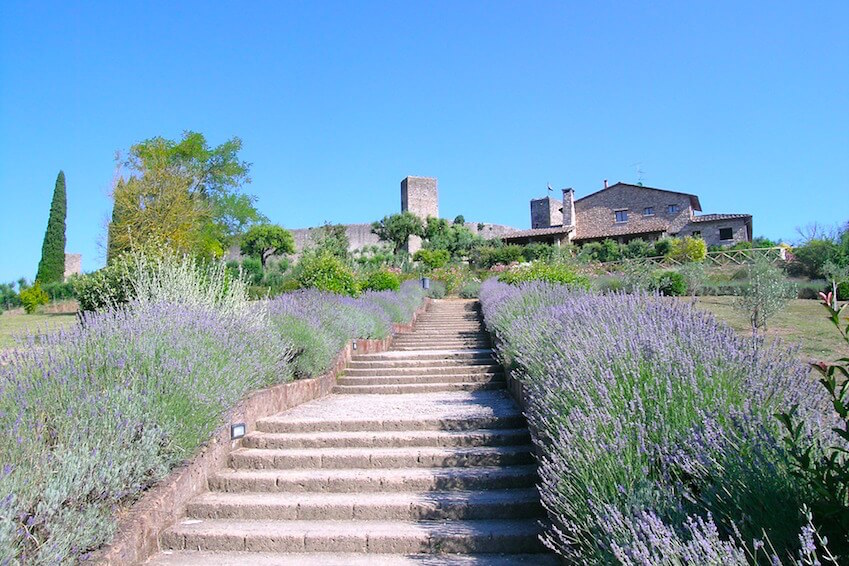 Monteriggioni: the medieval village in Tuscany loved by film makers

In the heart of the Sienese countryside lies the splendid village of Monteriggioni, unique in the world. Situated on top of a hill and protected by a perfectly preserved circular wall, Monteriggioni is undoubtedly one of the sites not to be missed on a trip to Tuscany. The historic centre, also known as the Castle, is very small but extremely charming. A visit to Monteriggioni means being immersed in a typical medieval atmosphere, but also in a real-life movie set, thanks to the village having formed the backdrop for several films such as Stealing Beauty by Bernardo Bertolucci, The English Patient by Anthony Minghella, and even for some scenes in Gladiator by Ridley Scott. Every year in July, a medieval festival is organised with costumed dances and all kinds of shows.

>>> Book your sumptuous villa in the center of Tuscany 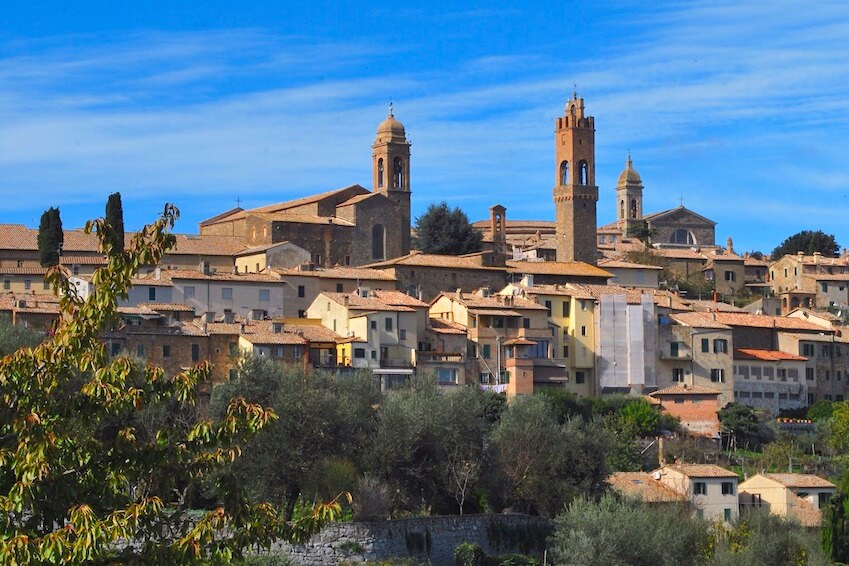 To the south of Siena, a charming medieval village stands proudly, surrounded by great walls, dominated by an ancient castle and characterised by its polygonal towers. Situated west of Pienza, in the heart of the Val'Orcia Natural Park, the medieval town of Montalcino is world famous for the production of Brunello di Montalcino, one of the most acclaimed red wines in the world. Climbing to the top of the village, you can enjoy a unique view of the unforgettable panorama of the Tuscan countryside, with its rolling hills, ancient oaks, picturesque olive trees, typical cypresses, and scenic country roads which snake through its lush vineyards. This capital of Brunello is the ideal place for a holiday based on gastronomy, history, friendly local people and good wine!

Castelnuovo di Val di Cecina is a pretty hilltop village in the province of Pisa, located in the Cecina Valley halfway between Volterra and Massa Marittima. Of Etruscan origin, Castelnuovo developed in the Middle Ages as a fortified village of the Republic of Pisa. In the village you can find the oratories of San Rocco and Madonna del Piano, but the main place of worship is undoubtedly the church of the Most Holy Saviour. Probably built between the end of the 11th and the first half of the 12th century, it stands at the highest point of the historic village, dominating the town with its bell tower. It houses a wooden crucifix from the early 14th century and an organ dating from the 17th century. Castelnuovo di Val di Cecina is also an ideal destination for nature lovers: several paths start from the village and lead to panoramic views and places of historical interest.

Volterra: the alabaster city in the heart of the Tuscan countryside

One of the most beautiful parts of Tuscany is located in the province of Pisa. Volterra is a jewel of Italian elegance sat upon a hill, renowned for its historical wonders, its works of art, its old town, but also for its alabaster handicraft. The Etruscans were the first to work with this material, whose tradition is still alive in the various shops in the historic centre. In recent years Volterra has gained international fame as one of the settings for the successful Twilight saga: author Stephenie Meyer made Volterra the home of the Volturi, a powerful vampire clan. Some scenes from the TV series I Medici were also filmed here. A breathtaking view of the Tuscan countryside awaits you at the top of this village.

Renting a luxury villa for a holiday to explore the most beautiful villages of Tuscany is without doubt the ideal option for all lovers of history and for all those who want to truly disconnect in the countryside. Whether it's on a hilltop in the Val d'Orcia, surrounded by vineyards, on the banks of the River Arno, near the Appenine Mountains, with a garden, a swimming pool or even a housekeeper, Villanovo's collection of luxury villas promises all visitors a fabulous stay in Italy! 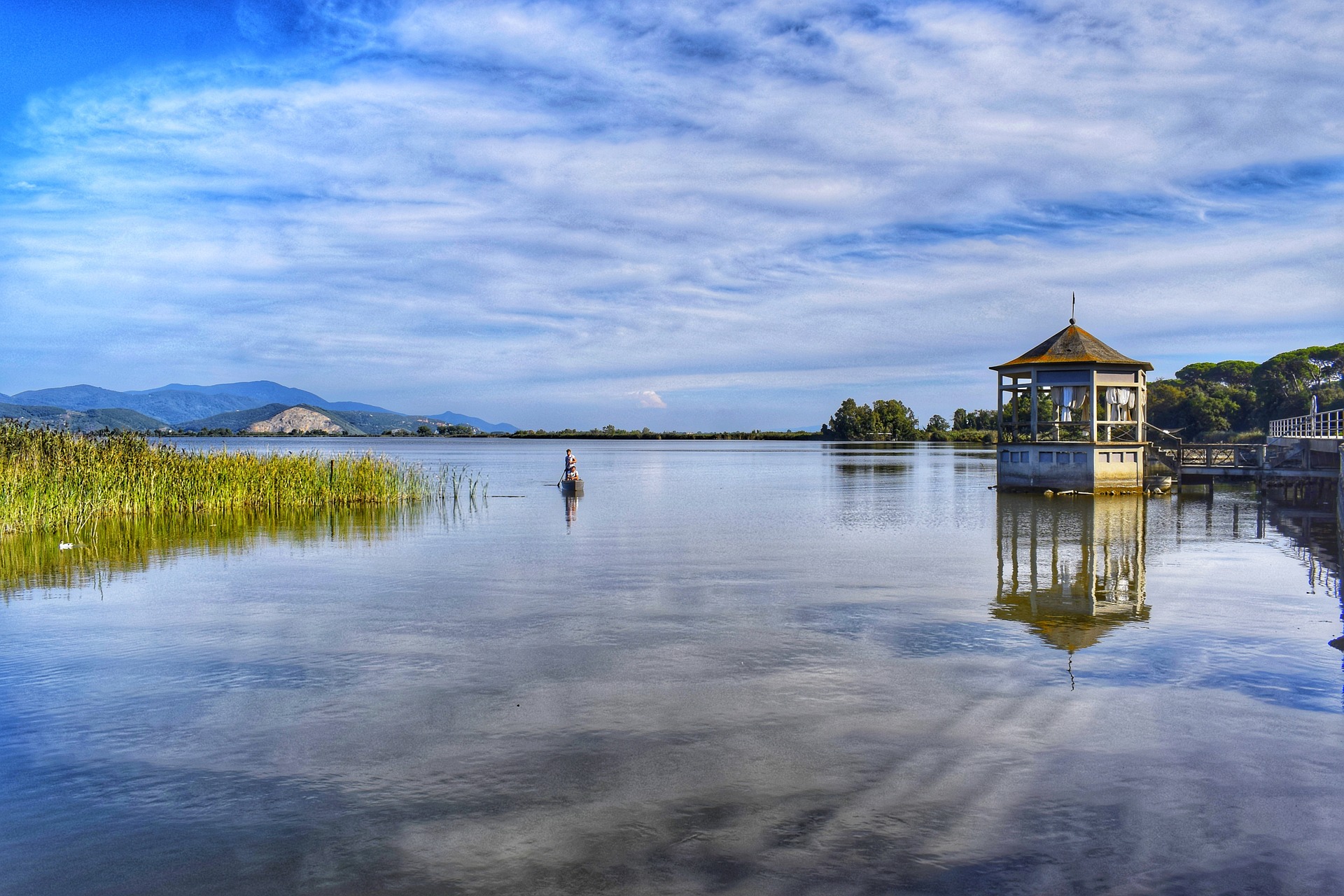 And how about Tuscany's stunning beaches?

Perhaps you would prefer a little time at the beach, with your other half or children, during your visit to Tuscany. Tuscany is also famous for its beautiful seaside resorts, sitting on the gorgeous shores of the Tyrrhenian sea. Forte dei Marmi, Viareggio or the beautiful towns of Porto Ercole and Porto Stefano in Monte Argentario... A stay in these coastal towns is often the best way to combine the pleasures of the sea with those of an expedition to the heart of the Tuscan countryside.