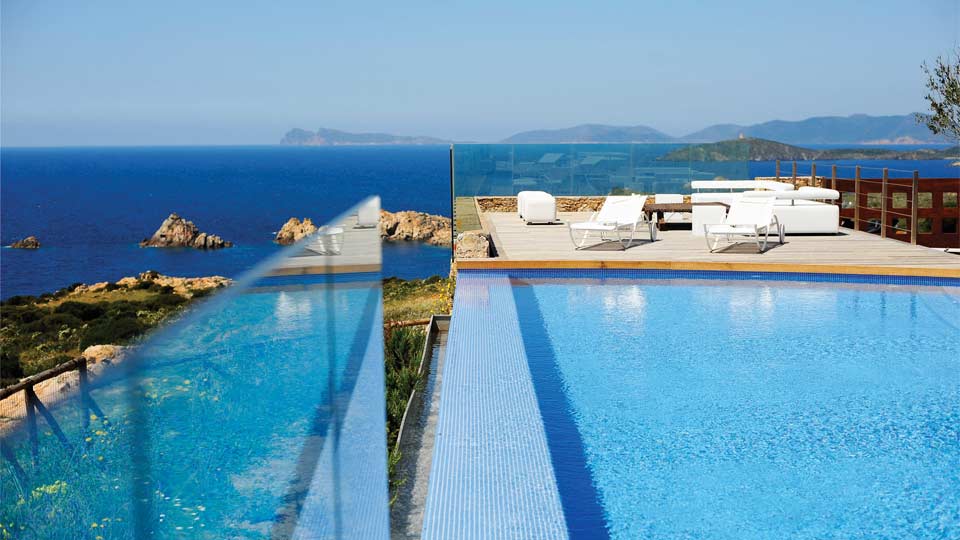 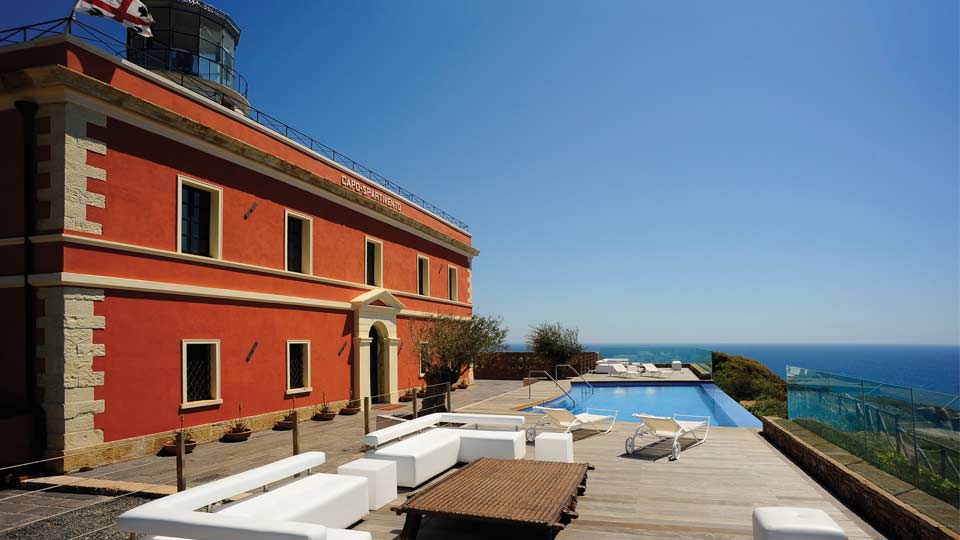 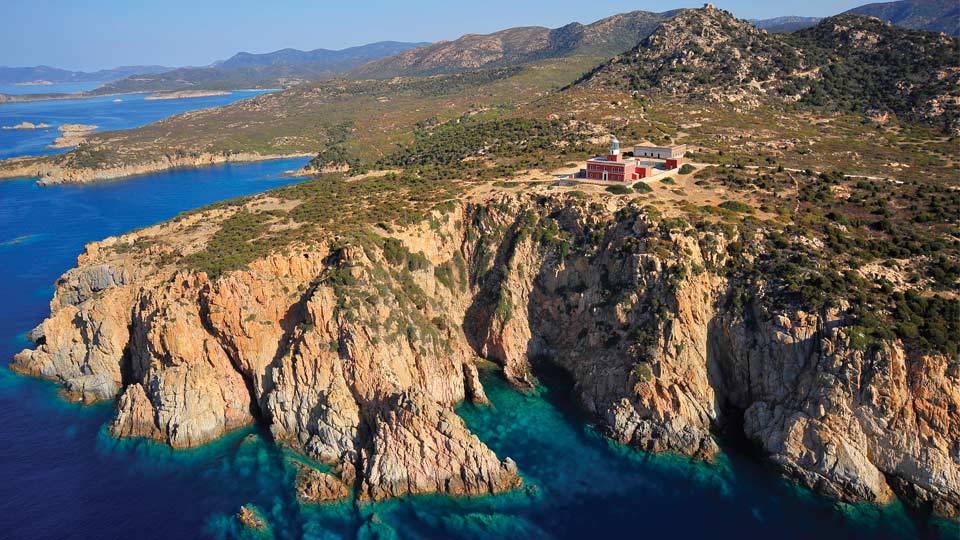 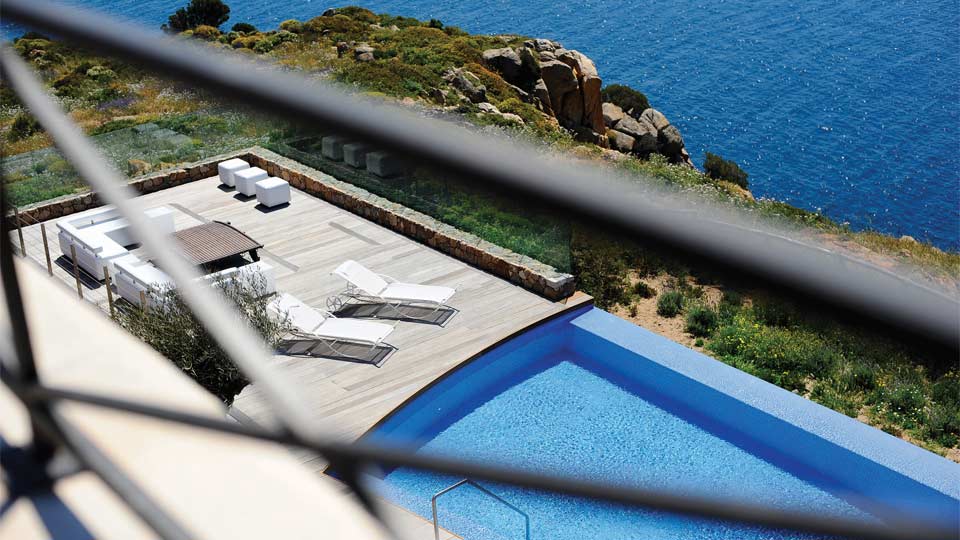 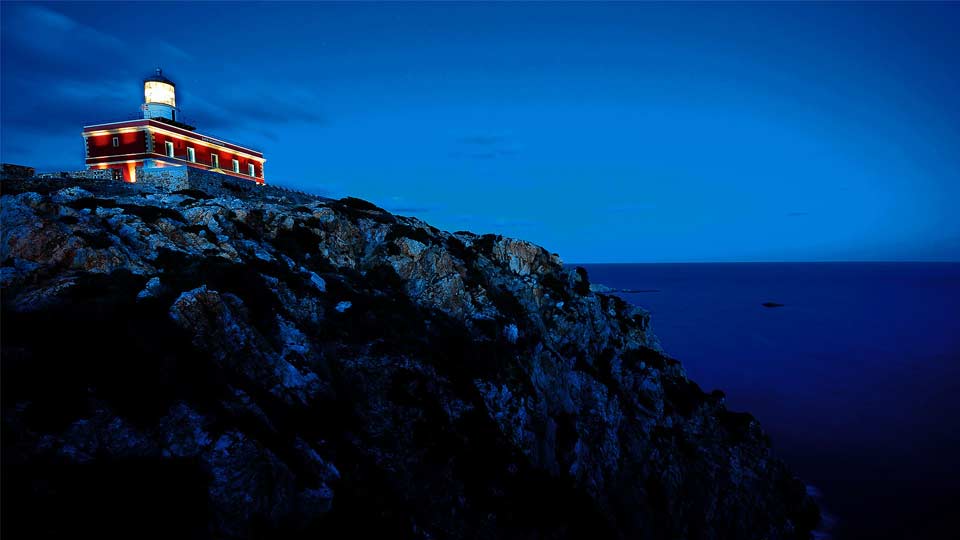 Add to selection
Il Faro was built in 1856 by the Italian Navy.
During the last war it was machine-gunned by American planes and, later on, it functioned as the lighthouse keepers residence until the late 80s.
It has lit the way for seamen for over 150 years, slicing the darkness like a sword with its welcoming beam of light, it has become a luxury guesthouse without losing its original function. The lighthouse is open all months of the year, and it’ s really amazing in summer and even in winter with the fantastic stormy weather of the location.

Location:
The property is located 50km from the Elmas Airport and the City of Cagliari, on a promontory called Capo Spartivento, in the area of Chia. This is the Southernmost tip of the island: a completely wild and unpolluted area, with no other buildings, covered by typical Mediterranean bushes, and surrounded by fine, heavenly white sandy beaches. A secondary dirt road leads to the lighthouse on top of the cliff above the sea.

Exterior:
At the back of the building there is a 3,000 sq metre garden with a huge centuries-old olive tree and a big lawn where you can sit on white sofas in front of a 12 metre fireplace and a barbecue area. In the middle of the garden, there are eight glass gazebos (16 sq metres each) and a sheltered area with tables where it is possible to have lunch in the open air enjoying the panoramic view of the sea and the hills far beyond or to have dinner under the flickering light of the lighthouse lantern. In the front of the building there is a large wooden platform, looking out on the cliff above the astonishing view of the sea. In the middle of the platform, there is an infinity pool (14m long, 6m wide and 1.3m deep), equipped with two hydro-massage water jets. Fine ancient Turkish carts have been turned into beds to sunbathe on. Elegant white leather sofas with 4 white beach umbrellas create an area where it’s possible to have breakfast or a tea in the afternoon, or to enjoy an aperitif in front of the immense sea or admire the sunset when the lantern is turned on and goats invade the surrounding promontory.

Interior:
Ground Floor: The structure is about 600 square metres. Through the imposing, arched glass front door, it is possible to see the sea. On the upper part of the arch, an old ornament with the initials in capital letters of King Vittorio Emanuele is still visible. The hall is large and elegant (120 sqm) with red, Murano crystal chandeliers. Five arches in the ceiling mark the border between five different areas once separated by walls, now replaced by monumental iron trusses, similar to the ones used in ore mines. Here there are four Luigi 16th-style big settees, a fireplace, an ancient mirror and a big ancient, table to seat six, and round glass tables for four. Wooden floor.

From the centre of the hall, a cast iron spiral staircase leads to the old underground cistern (water supply from a well), which is now functioning as a cellar. A stone passage leads to two bathrooms, a business area and a professional kitchen, a small office and the staff changing room with a bathroom. In the bathroom on the ground floor, the wash basin is held up by an ancient mortar found in the Mongolian countryside. The business area is equipped with a PC, internet access, fax, telephone, and hi-fi stereo canned music System.

First Floor: A stone spiral staircase leads to the first floor. Here you can find a reading room with a small fireplace, a sofa and a big old chest used as a bookshelf. Four smaller ensuite rooms (35sqm each) with wooden floor. Two of the suites have a sea view. They are furnished in a modern brilliant white style with round suspended beds. Two white glass walls separate a section of the room where there is a big wardrobe and the bathroom.

Two of the suites have a view of the hill at the back of the lighthouse. They are made up of three separate rooms: a drawing room in Provencal style with a sofa and TV, a bedroom with a canopy bed and a bathroom.

On the second floor, there is the terrace (250 square metres), where the lantern is located. The door to the lantern is on the third floor but access is prohibited by the Navy to which it still belongs. The terrace is equipped with four big canopies to sunbathe or lie down on to look at the sky at night. A telescope is available for a closer look at the stars and the moon.

From the terrace it is possible to enjoy a breath-taking 360-degree view of the surrounding area. Two additional mini-flats outside the main block of the lighthouse are part of the propriety. They are on two floors, 50 square metres each, and have a sitting room on the ground floor and a bedroom on the first floor. A glass roof allows you to admire the beautiful starry sky at night. These buildings, now restored, once housed the tanks for the gas used to fuel the lantern of the lighthouse.

Total number of beds: 12. All the rooms are equipped with a king size bed, a bathroom, big mirrors, a mini bar, a Satellite LCD TV, a DVD player, air conditioning, a safe, internet connection, and 3 sets of bed linen and towels.

Natural Attractions and Leisure Activities:
The white sandy beaches of Cala Cipolla and Su Giudeu, easily reachable by foot. Visit the ruins of the former semaphore station, once a weather station, on the hill where the lighthouse stands. From there you can enjoy an astonishing panoramic view of the coast.

The ruins of the former harbour, part of the lighthouse property, dating back to World War I, and to the surrounding small inlets with small sandy or pebbled beaches, within an easy walking distance.

Snorkeling or scuba diving in the crystal clear waters next to the Lighthouse.

Mountain bike rides along the coast to reach the beautiful beach of Tuerredda.

Horseback riding along the beach of Chia and to the lagoon, home to the characteristic pink flamingos.

Cross-country excursions to different sites: the archaeological ruins in the interior of the island, the old abandoned mines of Piscinas, the beaches around Capo Teulada and all around the island.

Boat or sail trips to the beaches of Capo Teulada, Capo Malfatano and Cala Zafferano (only reachable by boat)

Kite surfing on the beach of Chia

For your comfort and convenience

Not included in rates

- Children must be supervised by an adult at all times when using hot tub, pool, sauna or hammam
- Children welcome
- No safety fence around the pool
- Pool has no swimming guard
- Language spoken by staff : English - Italian
- Check-in : 16:00 h - Check out : 12:00 h

For some of our properties, the map does not show the exact location of the house.