Discover our villas
Home »
The magazine »
A Sicilian walk, through the ages and the landscapes

A Sicilian walk, through the ages and the landscapes 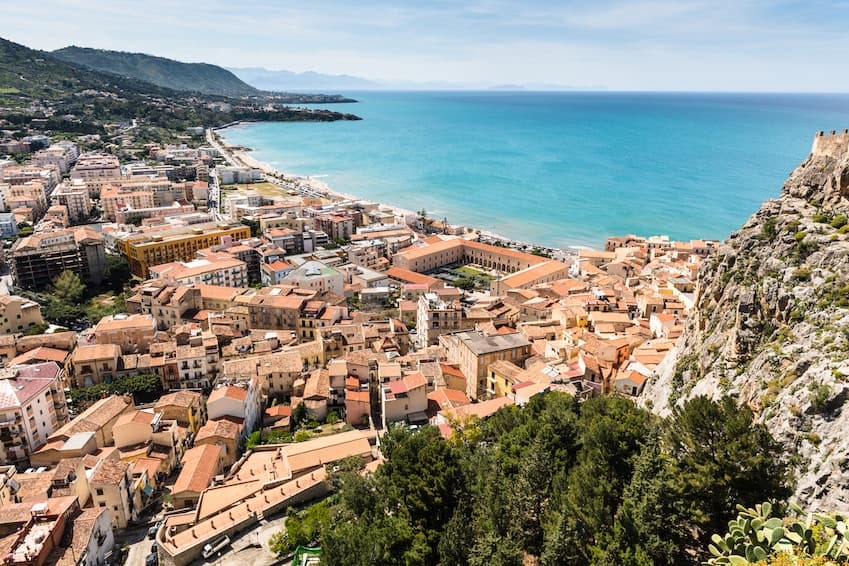 Welcome to Sicily, the Italian island where the landscapes are varied, the history is exciting and the culture is full of secrets. Let's go for a walk among the ruins of ancient Greek cities, castles that were used for the many medieval wars and Renaissance-style villages. A trip is also an invitation to taste. Stroll through the markets to get the best local products. Accompany your meals with a glass of wine and your Sicilian integration will come naturally.

This region, as we will see, is very suitable for upscale stays and the rental of charming villas.

>>> The most beautiful cities of Sicily 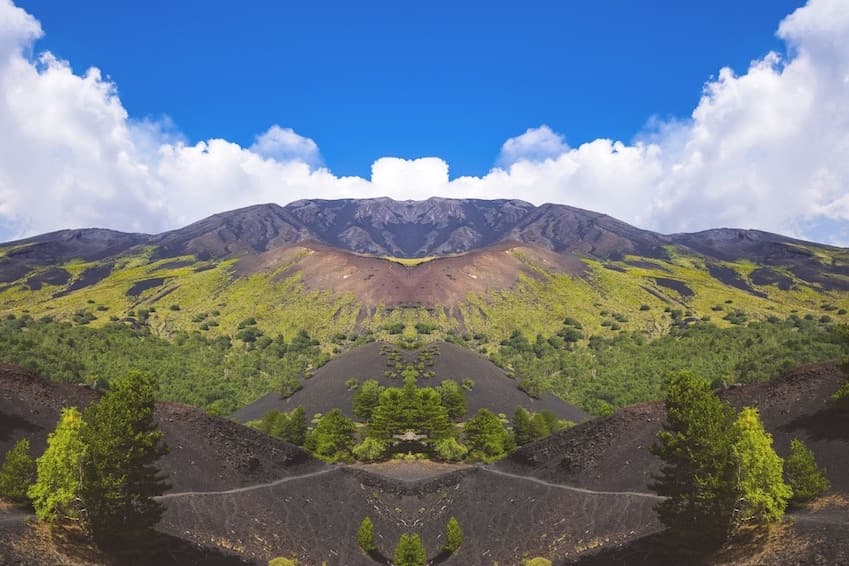 Let us continue by the whims of this island whose secrets we believe all discovered. There are two very active volcanoes and one just waiting to wake up. The Vulcano, the Stromboli and the most majestic, Etna.

Etna has nurtured many fantasies and legends. The first inhabitant of the island, the Greek cities were established on very fertile soil, but this is not without consequences. The volcanoes of Taormina and Catania very quickly inherited the name Etna. This term comes straight from the Greek aïtho, I burn! When there are Italians, there is wine! Very soon the Romans, the people who had inherited the island, were going to plant vines and obtain one of the best wines of the Empire. This wine today under the name of Etna Rosso is dynamic, fruity and even explosive on the palate. The two most prestigious grape varieties are Nerello Mascalese and Nerello Cappuccio. On the earth side, they are eternal snows. You will therefore be able to perfect your slalom a few hundred meters away from the fumes, guided by the winds... an unforgettable experience. To be able to enjoy the volcanoes of Sicily, you need sumptuous accommodation. Here is a dream villa in Taormina set inland. Just a stone's throw from Taormina, you will enjoy an idyllic view of the rocks and the bucolic city centre. In another completely Italian style, discover this sumptuous villa facing the Mediterranean Sea.

>>> Activities to do in Sicily 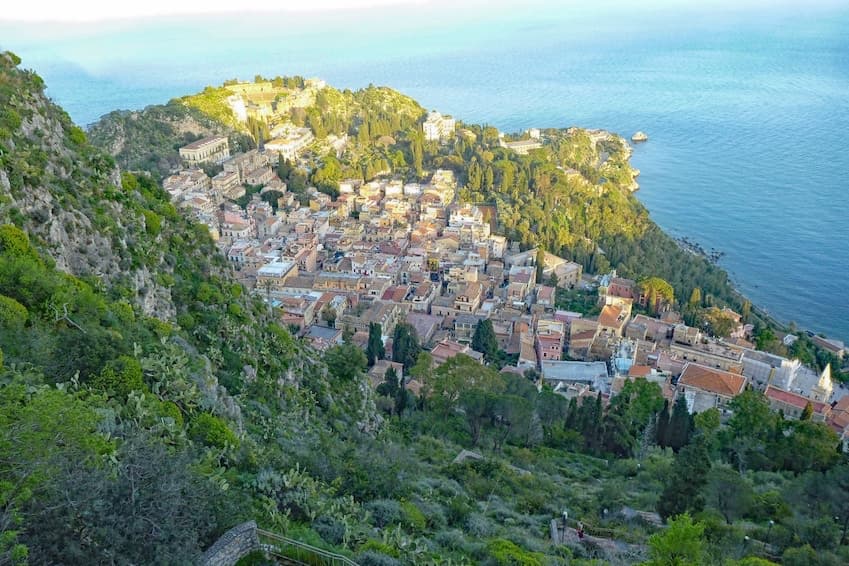 The thousand views of Taormina

When you are on Etna making your way through the vineyards, you will be blown away by the view of the Greco-Roman city and the blue sea. Taormina is a city of a thousand and one views, thanks to its location on many hills, just like the great Greek capital Athens.

Armed with a typical Italian gelato, set off to enjoy the most splendid views of the city. Start in the city centre in Piazza IX Aprile. At the convergence of two main arteries and a picturesque staircase, this square gently lets the vegetation take over the town planning. The view is splendid, you enjoy a privileged place to admire the peninsula of Isola Bella a few hundred meters below.

Then continue into the hills just outside the town where you will find the church of San Biagio which has all the attributes of a Sicilian church. The cross overlooking the hill, a small stone arch, the pastel painting that covers the four walls of this holy place and the simply breathtaking view over the rooftops of the town and the sea in the distance. We finish our tour of the views of Taormina at the far end. Who said that a panorama can only be contemplated from above? On the beach there are three wild peninsulas. It is possible to admire the city in reverse without getting wet, isn't it paradise?

In order to make this trip as ideal as possible, Bellavista offers you its collection of sumptuous residences located about ten minutes from the rocks of Taormina. Not far from the most beautiful beaches of Sicily, including Giardini Naxos, our charming homes in Taormina are ideal places to mix relaxation, discovery and swimming. 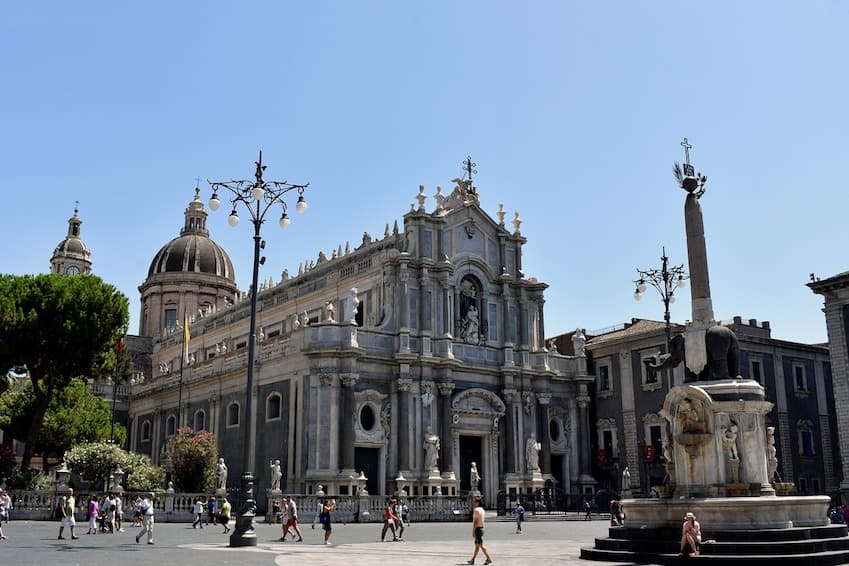 Catania, a city shaped by lava

Right in the centre of the city, the volcano also has a great presence. On the central square, you will see an elephant named U Liotu. This animal is special because it is made entirely of Etna lava stone. He carries a marble obelisk on his back that is supposed to protect the city from the whims of nature and the gods. It was a lost cause because many neighbourhoods will be buried under the lava. The buildings that were once neighbours of the Mediterranean are now more than two kilometres away from it. Today Catania is a dynamic city that loves to party. The city centre is lively until the early hours of the morning, how would it be possible to resist the call of the night when it is still twenty degrees when the sun is at the antipodes.

>>> Discover Sicily out of season 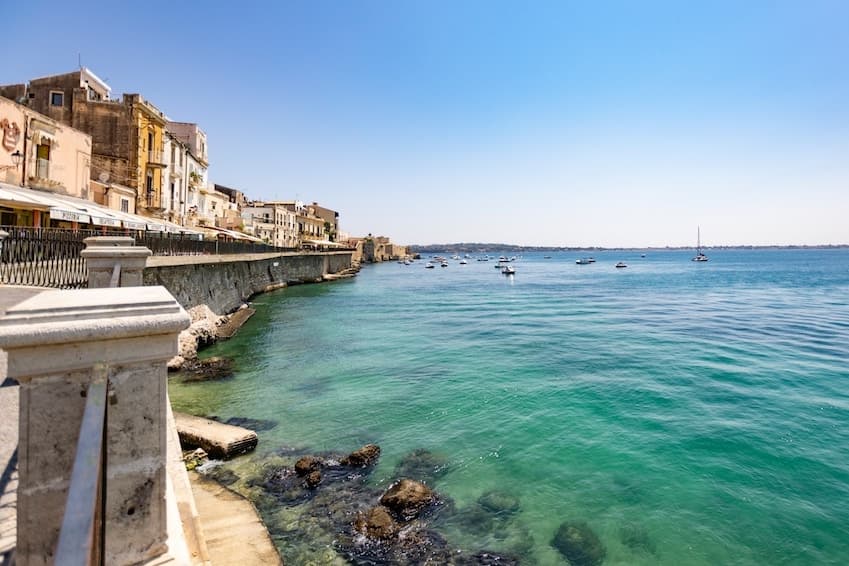 Syracuse, a peninsula of history

The visit of Syracuse begins naturally with the Greek city. Witness of the first settlements. The amphitheatre is built into the ground and can accommodate up to 20,000 people. The ellipse is 140 meters long, ideal for animal fights. The catacombs of St. John, not far from the playground, served as a prison for prisoners of the Crusades. Founded in the 8th century BC, the city, like Sicily, has seen many civilizations pass through. Greeks, Romans, Carthaginians, Byzantines, Aragonese, Normans, Genoese... all of them have left their mark on the Sicilian cultural heritage. It is moreover thanks to these adventures that Sicily is one of the regions with the most places inscribed on the UNESCO World Heritage List.

Standing on the heights, you can see a peninsula whose urban planning has taken over the rock. It is initially the anti-city of Syracuse! The islet of Ortygia will be the place of a desertion. The inhabitants feel that war will soon break out in Greece and do not want to be called back to fight. Chance does things well, a piece of land on the waves awaits them to establish a new city where freedom is the watchword. Today, this district is the historical centre of the city. Baroque and Renaissance in style, it is a showcase of the various architectural trends that emancipated themselves at the end of the Middle Ages in Sicily.

To be able to appreciate the best of what Sicily has to offer, you need sumptuous accommodation. Here is a dream villa in Siracusa on the Mediterranean coast. Just a stone's throw from Siracusa, you will enjoy an idyllic view of the rocks and the bucolic city centre. In another completely Italian style, discover this magnificent villa facing the Mediterranean Sea. The intimate setting will allow you to relax in the swimming pool without having to worry about the people opposite.

>>> The history of Italy

The Valle dei Templi, the home of the Gods

The Valley of the Temples is the historical jewel of the Mediterranean. Loaded with history and myths, the home of the Gods of Magna Graecia reveals its jewels to those who want to appreciate them. Temples of Zeus, Poseidon, Hera and many others, the deities of Olympus all have a home in Sicily. The Valle dei Templi is the historical jewel of the Mediterranean. It is a witness to the Greek history of Sicily and the Mediterranean. Take advantage of your trip to Sicily to indulge in the expedition to the beautiful beach of the Scala Dei Turchi. Literally The Stairs of the Turks, this name comes from the invasions of Arab pirates called Turks by the local people. Made of limestone rock, the marl hill shelters the boats from the wind and gusts of wind, it provides a safer boarding for the pirates. Today, it is not the pirates who take over the place but the locals who love to be well and Dolce Vità. You will enjoy an unforgettable sunset on this beach.

In a postcard setting, enjoy this charming home with its colourful hues. Nothing in the world is better than relaxing in front of the pool, with an idyllic view below. The tranquillity of our dream villas in Agrigento on one level is only broken by the sound of the Mediterranean waves.

>>> Unmissable Places to Visit in Sicily