Our most beautiful villas in Umbria

Crossed by the Tigris, Umbria offers a rich and varied itinerary, between the cities of Perugia, the flamboyant capital, Assisi, where the memory of Saint Francis is perpetuated, or Gubbio, a true medieval wonder. Characterized by its gastronomic heritage, this beautiful green region will seduce you with its splendour, while being a haven of peace.
>>>The history of Italy

For holidays with family or friends, Villanovo recommends the impressive Villa Montone in northern Umbria. Located on a medieval watchtower on the ridge of a mountain, the villa offers breathtaking 360° views of the Carpini Valley. Its 7 luxury rooms, with their private bathrooms, can accommodate up to 14 people. The magnificent stone walls inside the villa will dazzle you, as well as the modern and contemporary minimalist décor, which allows you to admire the architecture of this magnificent property. As for the exteriors, they are just as impressive as the interior.  The 6 hectares of garden and forest are excellently maintained, mainly by rainfall which is kept for irrigation, just like the 25-metre infinity pool, heated by energy provided by solar panels. What could be better than a luxurious and ecological villa?
>>>Bucket List special Italy

This charming 3 bedroom villa with private bathrooms can accommodate up to 6 people, making it ideal for a family holiday. Located in one of the most exclusive private estates in Umbria, the house is at the top of Mount Santa Croce and overlooks the valley, offering breathtaking 360° views. Relax in this charming house, with an authentic and soothing decoration. After a day spent in the heated infinity pool, in absolute calm, enjoy a delightful moment with the family while having a drink on the furnished terrace while admiring the magnificent setting sun.
>>>More details on Villa Santa Croce

Are you dreaming of a little getaway with family or friends to a traditional Italian country villa ? If so, Villa Romeo is for you ! This magnificent property on the border of Umbria and Tuscany, 7 kilometres from the famous city of Gubbio, has 10 rooms, all with private bathrooms, as well as an elevator to travel the floors and can accommodate up to 20 people. The assets of this sumptuous villa are the magnificent living rooms decorated with impressive frescoes. At nightfall, sit at the table in the kiosk, near the pool, to taste Italian delicacies.
>>>Discover all our villas in Umbria 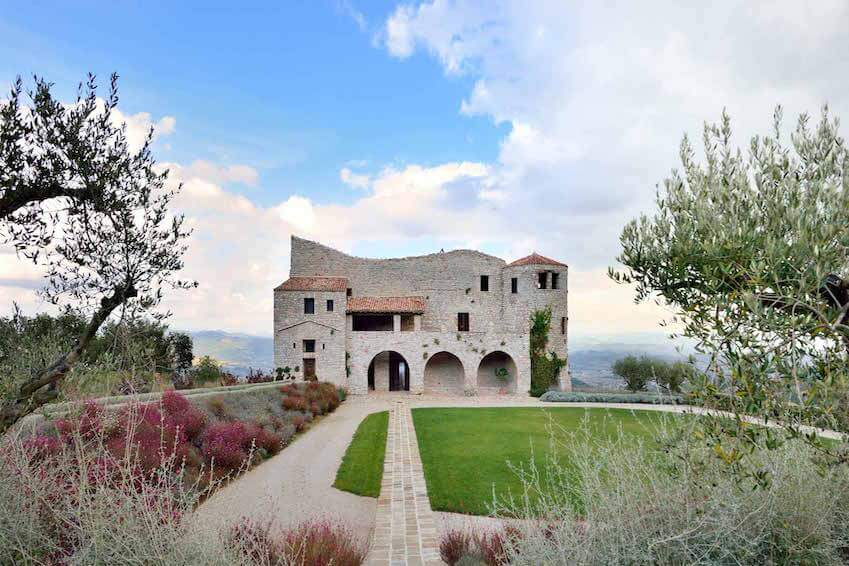 Travel in the past guaranteed: Castello Perugia

Go back in time by staying in this 8 bedroom castle with private bathrooms, to accommodate up to 16 people, dating from the 12th century, renovated in 2005. It was once commanded by the Germánic Emperor Federico Barbarossa, before being abandoned. Although it has been restored, this castle is faithful to its heritage with its Renaissance décor and furniture and functions as a modern house. Castello Perugia has all the ingredients for the perfect holiday recipe, it includes a heated private swimming pool, jacuzzi, pool house, fitness centre, Turkish bath, not to mention the panoramic view of the countryside around Assisi.
>>>Experience the castle life in Italy

With its 9 high standard rooms that can accommodate 18 people, Villa Subtilia, a very beautiful 16th century farmhouse in 3 distinct parts, is the ideal villa for a stay with friends or family. Located in an exclusive estate in central Umbria, on the top of the Murlo hills, the villa offers a spectacular view of the medieval castle of Antognolla and its 18-hole golf course. With Perugia 20 minutes away, where you will have the opportunity to participate in various cultural activities, and Rome and Florence 2 hours away, you will have enough to do! For the more homely, spend your afternoons by the pool or jacuzzi, devouring your favourite book, before heading to the pergola for a drink and a breathtaking view.
>>>Discover all our villas in Italy