Indonesia is an archipelago of more than 17,000 islands formed by the convergence of tectonic plates. A unique situation that has resulted in more than 150 volcanoes, most of which are still active. Over the centuries, numerous eruptions have created the magnificent panoramas we know today, made up of sumptuous calderas and volcanic lakes whose ashes make Indonesia one of the most fertile lands in the world.

If you are planning to visit Indonesia, don't just visit the country's dream beaches and relax because you would miss the fascinating and unique landscapes of this volcano land. Here is our selection of the most beautiful volcanoes in Indonesia to take height and admire the grandeur of this mysterious country. 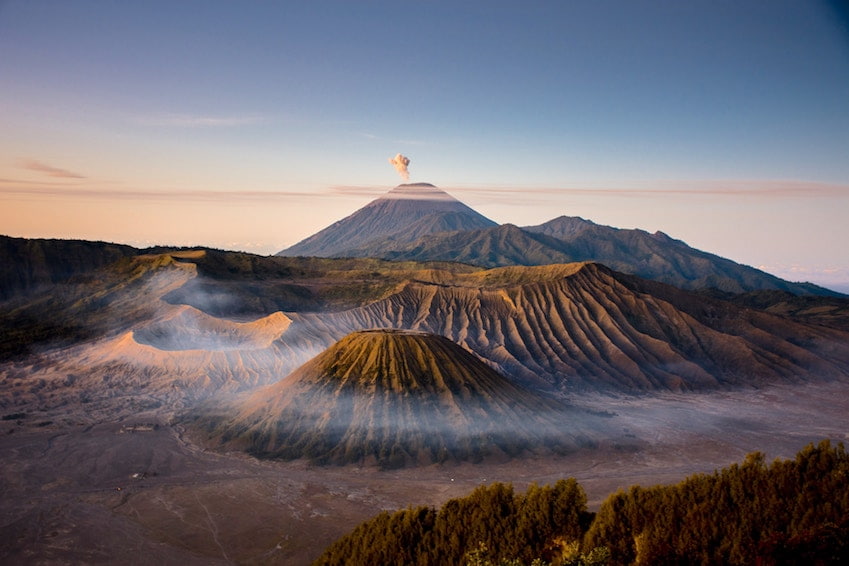 Mount Bromo, the most active

Climbing to the top, night and day, is relatively easy. The paths are easily accessible and part of the route can even be done by 4x4. A stairway awaits you for a ten-minute ascent that will lead you straight to the crater. 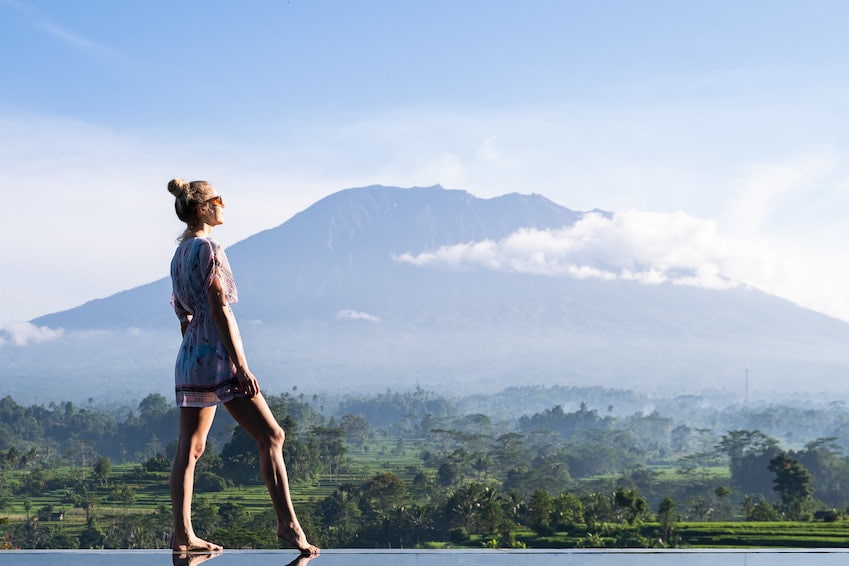 Mount Agung, the most sacred

Mount Agung is one of Bali's wonders and watches over the island from the top of its 3,142 metres high. The volcano is a true sacred place for the Balinese people. It is a true paradise of nature with an exceptional fauna and flora. You will certainly encounter many wild animals in these lush woods such as wild pigs, macaques and raptors. Once at the top, a breathtaking view of Bali awaits you with exceptional views of the rice fields, vegetation and surrounding hills.

Near the crater you will find the Hindu temple Besakih, one of the most beautiful sites in the region. During a violent eruption in 1963, it was barely spared by lava flows. This miracle was seen as a blessing from the gods. It houses splendid sanctuaries, altars and statues.

The ascent of the volcano is possible by several different hiking trails, which allows you to choose the route that suits you best. It will take you about 6 hours to walk through its dense forests and finally reach the highest point of Mount Agung. 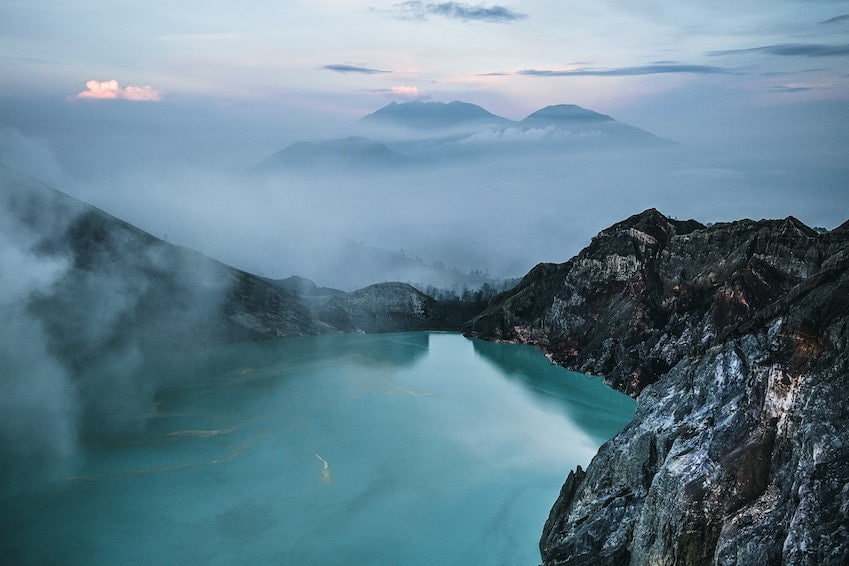 Mount Kawah Ijen, the most mysterious

Located in East Java, Mount Kawah Ijen is certainly one of Indonesia's most impressive volcanoes, not because of its height but because of its unique landscapes. In its centre is a superb sulphurous lake with turquoise colours, the largest acid lake on the planet. The Kawah Ijen volcano is even more impressive at night because you can see a superb electric blue colour emerging from the sulphur fumes.

The site is also famous for its sulphur carriers. Coming from neighbouring villages, these men transport, barefoot or in flip-flops, blocks of sulphur in baskets of at least 60 kilos and are paid according to the weight of sulphur they bring back from the mountain.

The climb is not the easiest and is rather steep but the efforts are really worth it. The paths are rather well traced and practicable, which makes hiking accessible to everyone, young and old. Allow about 2 hours to reach the top of the volcano and finally be able to admire this natural spectacle. 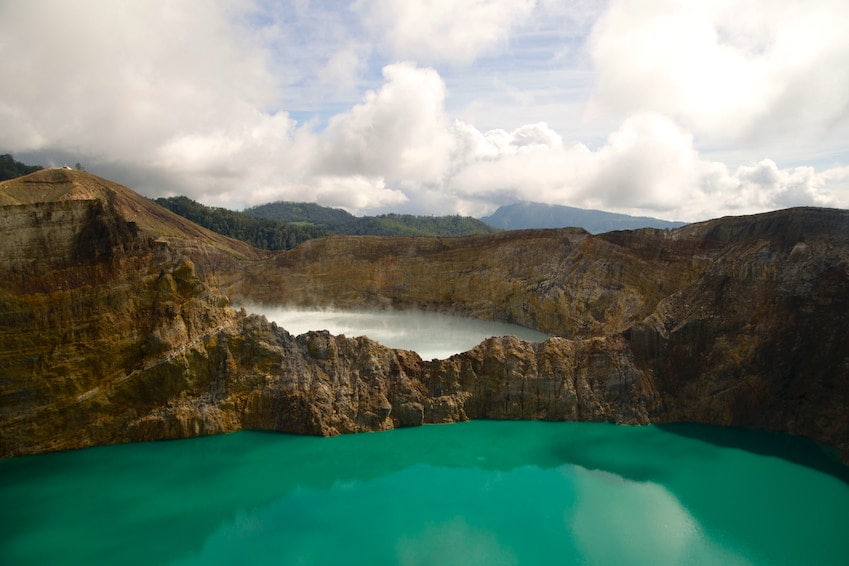 Mount Kelimutu, the most fascinating

Described as Indonesia's most beautiful volcano, Mount Kelimutu is located on the island of Florès and reaches an altitude of 1,639 metres. The latter stands out from other volcanoes because at its top are three volcanic lakes with changing colours ranging from blue to ochre red. Colours vary according to the seasons and the chemical composition of the water.

True emblems of the island, the 3 lakes are considered sacred to the inhabitants of Florès who believe that they are inhabited by spirits. Tiwu Nuwa Muri Koo Fai and Tiwu Ata Polosont, simply separated by a land rampart, would shelter the souls of ancestors and younger people. Lake Tiwu Ata Mbupu, more distant and with darker colours, would be dedicated to the souls of evil spirits.

The site of the three lakes and its surroundings are now a protected area with multiple endemic species. If you keep your eyes open, you may have a chance to observe rare animals. 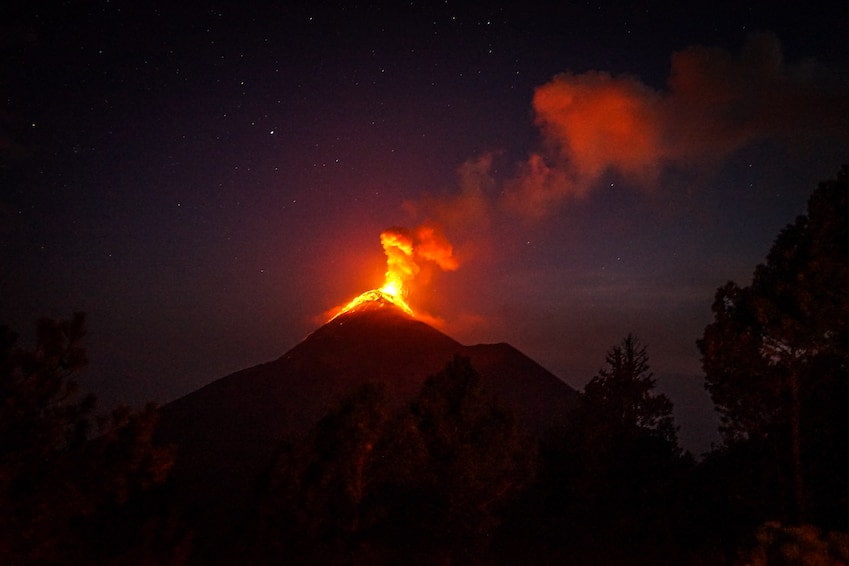 Mount Krakatau, the most dangerous

Mount Krakatau is a volcanic island in the Sunda Strait, between Java and Sumatra. The latter is infamous for its violent eruption of August 27, 1883, an eruption so strong that it was heard and felt all over the planet causing one of the most violent cataclysms in history. In June 1927, at the exact location of the former extinct Krakatau volcano, fishermen noticed gas escaping from the water's surface before the sea began to release ash and rocks into the air, quickly forming a new island. This new volcanic cone was named Anak Krakatau, "the child of Krakatau". Since then, the volcano has been active advancing the island on the ocean and remains one of Indonesia's most dangerous volcanoes.

If you wish to climb this volcano, you must first keep yourself informed of its activity and check that hiking is allowed. Mount Krakatau is easily accessible from Jakarta. A boat will take you to a charming little black sandy beach, then you can finally set off to conquer the volcano. It will take you about 40 minutes to reach the first level and at this level you will already feel the heat from the ground. You need a permit to go beyond the first level. 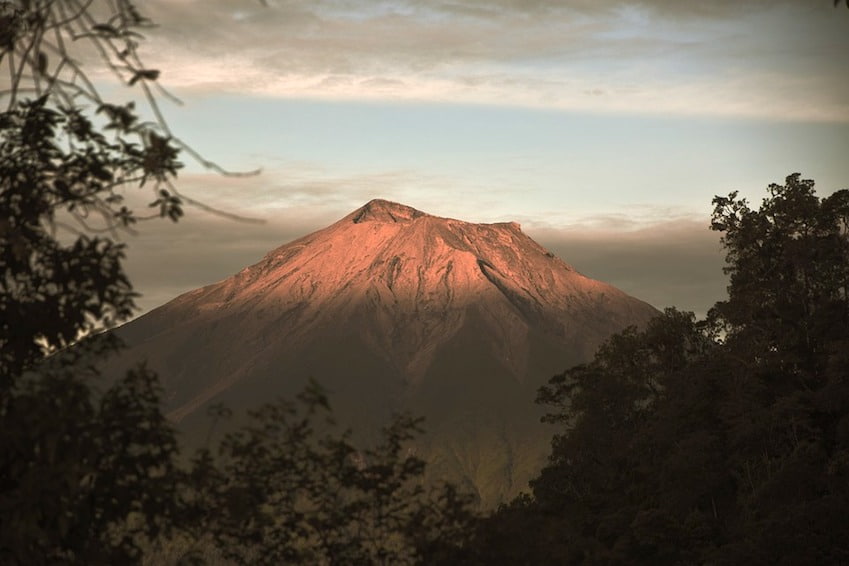 Rising to an altitude of 3,805 metres, Mount Kerinci is Indonesia's highest volcano and is also one of the country's most active volcanoes. Kerinci is the dream of every experienced hiker travelling to Indonesia. The path is really worth it because you will have the opportunity to meet some of the rarest fauna and flora such as macaques and birds, while admiring breathtaking landscapes.

In addition to its exceptional fauna, Mount Kerinci has a vast crater on its summit that shelters a volcanic lake with fascinating colours, not to mention the incredible views that await you there. The expression "to have your head in the clouds" has never been so true!

Climbing Mount Kerinci is far from easy and requires good physical condition and adapted equipment because most of the hiking is done in the humid and muddy jungle. Count at least 3 days and 2 nights if you want to reach its peak.