11 famous TV & movie locations you can visit from our villas

For TV and movie buffs, it can be particularly exciting to walk on the same ground that your favourite characters have in treasured and repeatedly-watched scenes. Sometimes these places have been greatly adapted for the screen beyond recognition, however, in the ten following filming locations, it is easy to imagine scenes from these well-known series’ and movies playing out before your eyes. 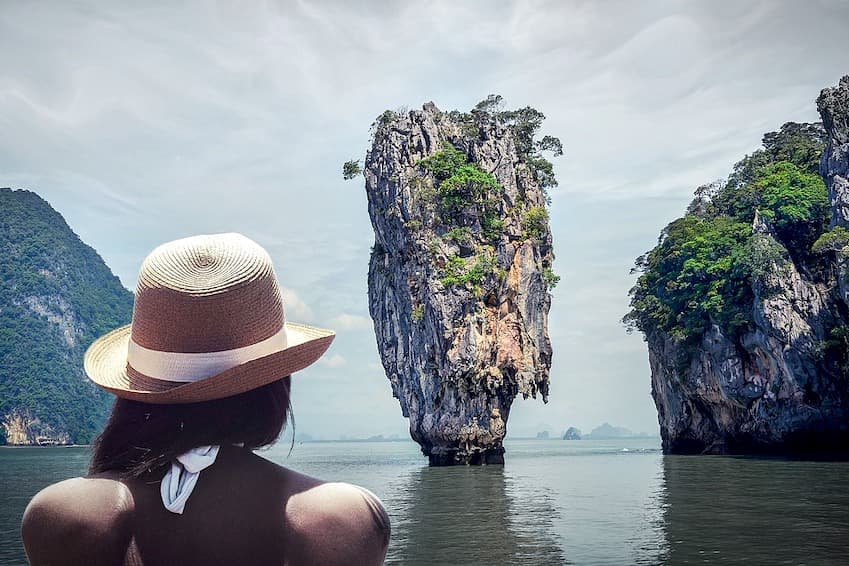 1 - Phuket, Thailand - James Bond: The Man with the Golden Gun

An unmissable location for Bond fans is Ao Phang Nga National Park near Phuket, specifically at Ko Tapu, Khao-Phing-Kan. This incredibly scenic site of limestone karsts looming out of the ocean, covered with greenery, was the chosen setting for Scaramanga’s hideout in the 9th installment of the franchise. While you’re here you can also go on a tour that allows you to explore the dramatic Mangrove and Diamond Cave or Hong Island, where you can delight in the resident monkeys. You can actually go onto the famous beach at the “James Bond Island”, with tours giving you around an hour to explore. Though you won’t have the beach to yourself, it’s still a spectacular sight that has the same distinctive features as in the 1974 film!

>>> Our villas in Phuket 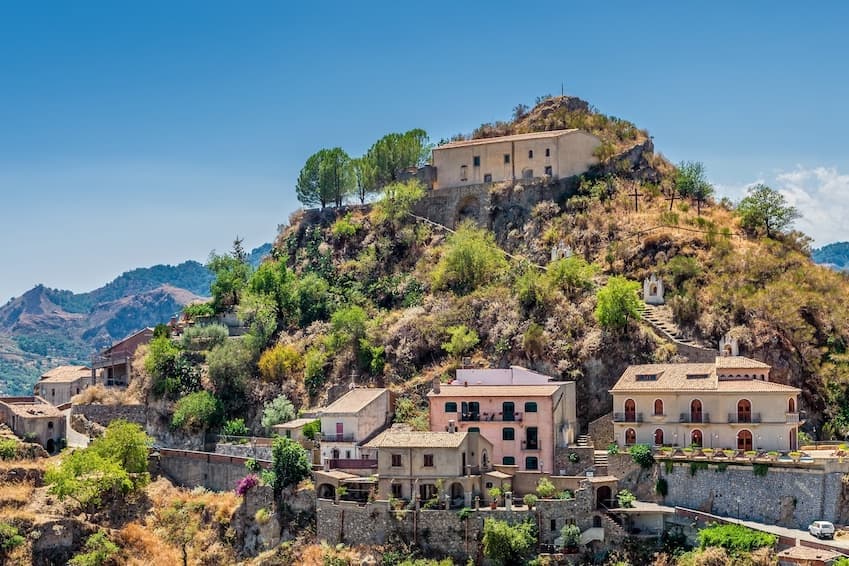 Whether you have seen The Godfather movies or not, the island of Sicily is absolutely stunning, from its spectacular clear-watered beaches to the quaint cobbled-street towns. If you have seen the movies, a trip to Bar Vitelli in the town of Savoca is particularly interesting, as many memorable scenes took place here. To your delight, the bar today remains completely unspoilt and looks pretty much the same as it did when it was used for filming in the 70s. The only thing that obviously did not appear in the movie is the memorabilia in its small gallery of photographs and articles related to The Godfather. The Church of Santa Lucia in Savoca was also used as the setting for Michael Corleone’s wedding. This town is actually meant to be the inland town of Corleone, so Savoca’s beautiful ocean views were carefully omitted from the frames. The Church of Sant’Agostino in Forza d’Agrò also provides a backdrop for Michael’s first arrival in Sicily, as well as a chase scene in the Godfather II. The capital of Palermo also features in The Godfather III, with some of the key final scenes taking place at the stunning Teatro Massimo.

>>> Our villas in Sicily 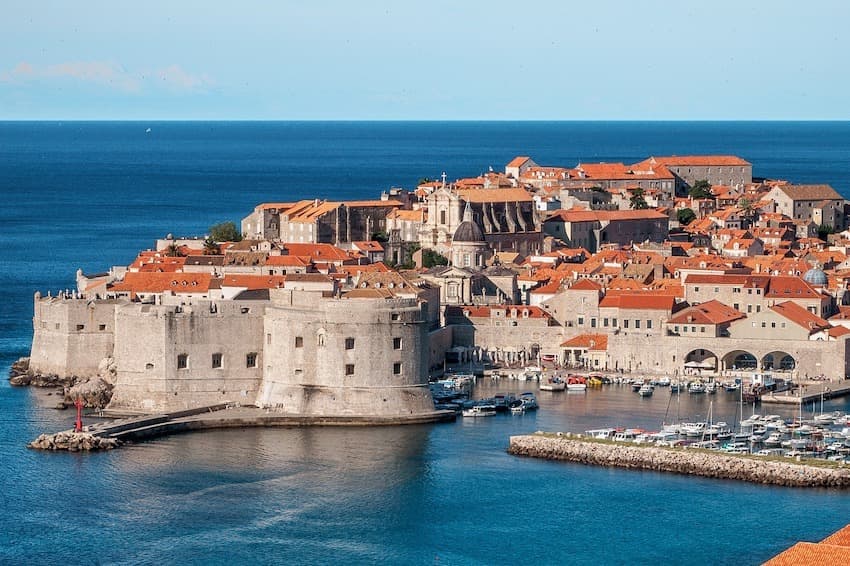 Many pivotal scenes in this explosive series occurred within the walls of King’s Landing, AKA Dubrovnik, Croatia. With its fortified port, the winding and narrow tall-walled streets of the Old Town and its dramatic surroundings, it is easy to see the city as an ancient kingdom. Avoiding spoilers for any of the few that have not yet seen the series, the infamous “shame” scene began on the grand Spanish steps before progressing through the Old Town to Fort Lovrijenac. Minčeta Tower became the House of the Undying, the stunning and fascinating Ethnographic Museum (that is well worth a visit even if you haven’t seen the series, with over 6500 artefacts from Dubrovnik, Croatia and the surrounding areas) became Littlefinger’s brothel, Fort Lovrijenac the Red Keep and the former Benedictine monastery and botanical gardens on Lokrum Island (a beautiful landscape of turquoise waters and lush nature just a 15 minute boat ride from the Old City) acted as the backdrop in Season 2 for Daenerys’ visit to Qarth.

>>> Our villas in Dubrovnik 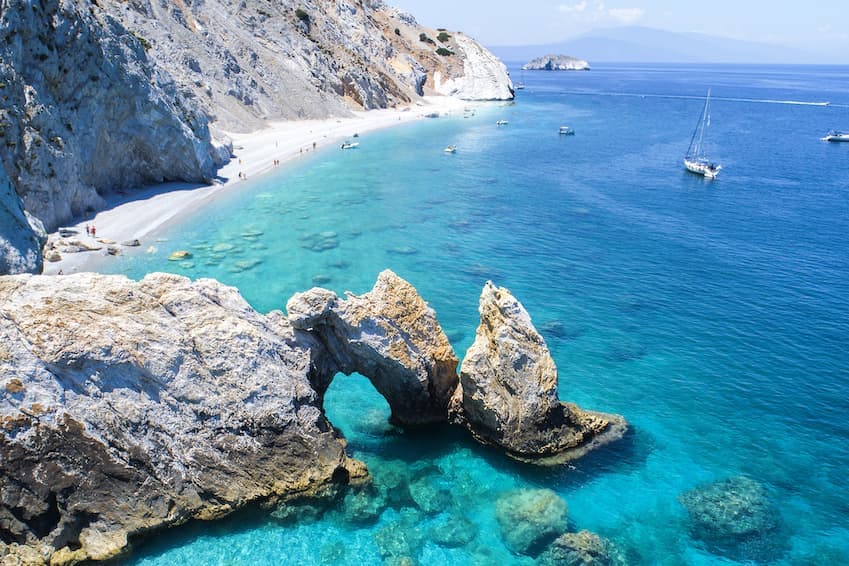 Skiathos is one of the most dazzling of the Greek islands, and many of its exquisite beaches were used were used in the movie, as well as the Old Port providing the setting where the three possible fathers meet for the first time. Once you are on Skiathos, you can also easily access the neighbouring island of Skopelos by ferry, which served as the backdrop of Kalokairi for many other scenes in the sunny musical. A mountainous peninsula close to Glysteri is reportedly the location of Sophie’s cliff jumping scene, as well as where she leaves for her wedding. The Church of Agios Ioannis Kastri in the north of Skopelos is undoubtedly one of the most sought after filming locations for fans though, as the tiny church is the epitome of picturesque, perched on top of a rock that juts up from the sea.

>>> Our villas in Skiathos 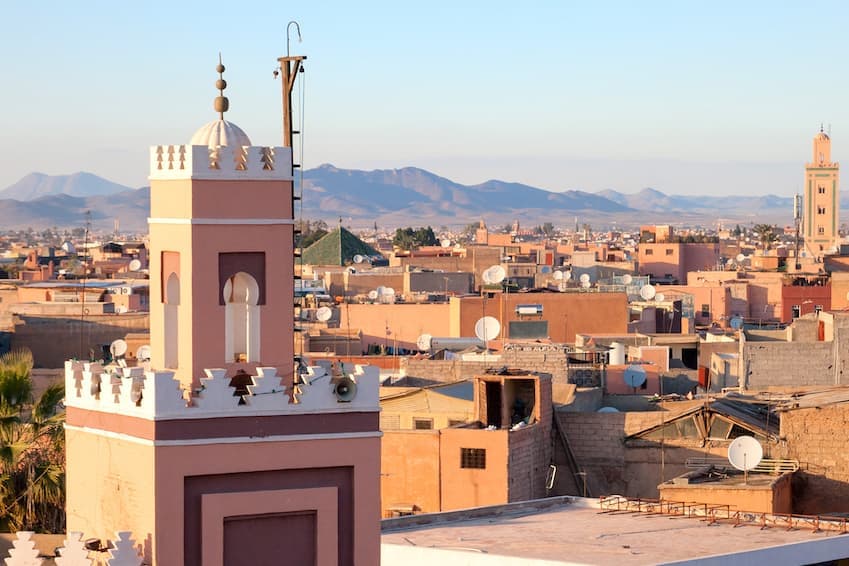 Though, of course, The Mummy is supposed to be set in Egypt, much of it was in fact shot in Morocco, where 1925 Cairo was actually filmed in Marrakech. The exterior of the ‘Museum of Antiquities in Cairo’ in particular was in Marrakech, as well as the colourful souks of Marrakech posing as the bazaars of Cairo, and the main square of Djemma El Fna also features in the movie. Many other scenes were shot elsewhere in Morocco in locations such as the stunning golden-orange sands of the Erg Chebbi desert dunes.

>>> Our villas in Marrakech 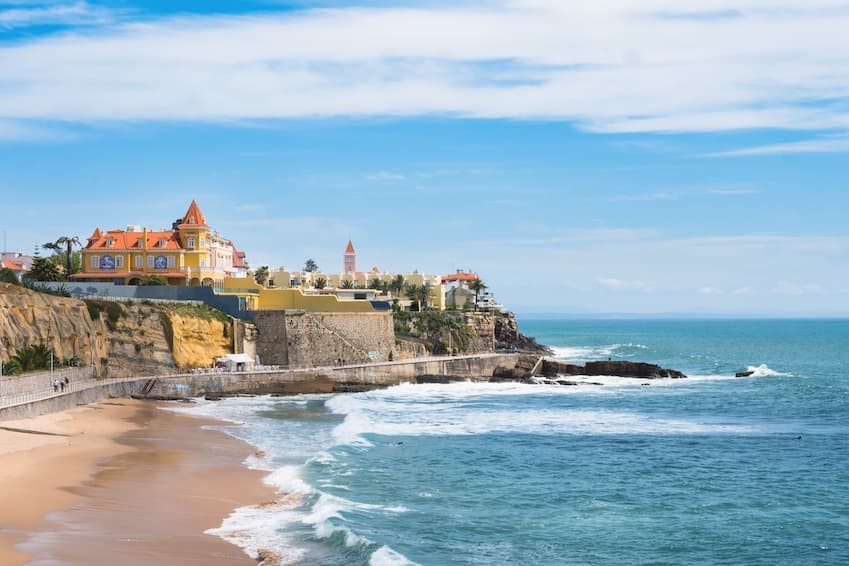 In the sixth installment of the James Bond movies, many of the filming locations were in the seaside resort of Estoril, 18 km west of Lisbon. For instance, Bond stays at the Palácio Estoril Hotel, which is fitting as in real life it was once supposedly host to many British and German spies. Estoril was also once where many royal families went into exile during World War II, landing it the name of the Coast of Kings. Bond is then found on the coastal roads around Estoril and Cascais, notably around the bend of a carpark lined with palm trees on the intersecting roads of Avenida Dom Carlos I and Parada da Artilharia Antiaérea in his Aston Martin.

>>> Our villas in Estoril 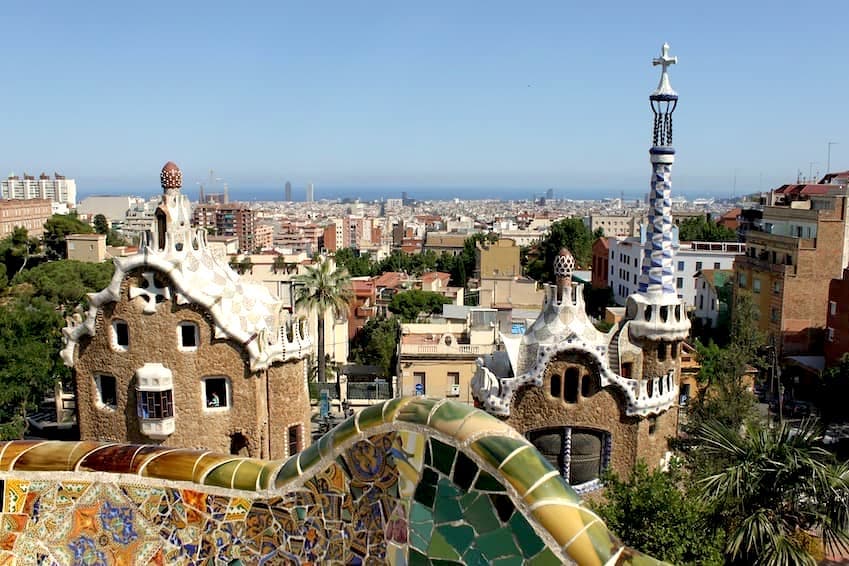 Nothing makes a summer in Barcelona more appealing than the rose-gold tinted lens of this movie, where many of the city’s beloved icons flicker across the screen as we follow the various romances unfold. Of course, there’s many of Gaudi’s architectural creations featured, including the towering Sagrada Familia, the curving rooftop of Casa Milà and the colourful mosaics of Parc Güell. The lovely and simple Plaça de Sant Felip Neri with its central fountain and dotting of trees is the setting for a daytime drink between the two couples, where they then enjoy the playful Tibidabo Amusement Park with views over the whole of Barcelona. Meetings on the long and grand street of Passeig de Gràcia, Vicky and Cristina walking down the beautiful steps leading to the National Art Museum of Catalonia on Montjuic, or sitting at an outdoor table at Taller de Tapas on the notorious La Rambla, Scarlett Johansson’s character taking photos in the Gothic Quarter on streets such as Carrer dels Banys Vells...the film locations you can visit are almost too many to name.

>>> Our villas in Barcelona 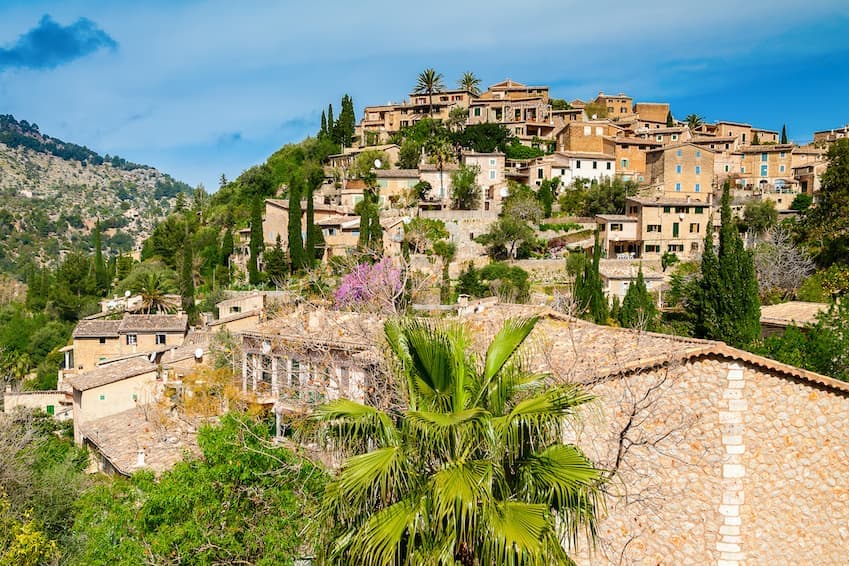 The thrilling adaptation of John Le Carre’s novel was filmed predominantly on the scenic Balearic island, with huge names such as Hugh Laurie, Tom Hiddleston, Olivia Colman and Elizabeth Debicki starring. The Hospes Maricel Hotel and Spa in Ca’s Catala was the elegant setting for several scenes, notably by the pool with views over the bay, whereas La Fortaleza in Port de Pollença became Richard Roper’s lair surrounded by splendid gardens. For those wanting to experience the delicious local gastronomy, head to Ca’s Patro March, a famous seafood restaurant in Cala Deià, where a kidnapping scene takes place. There is also a lovely sheltered cove here that is perfect for a swim. In the beautiful capital of Palma several locations were also used for filming, including the Santa Eulalia church, Café Moderno and Sadrassana restaurant in Plaça de Drassanes.

>>> Our villas in Mallorca 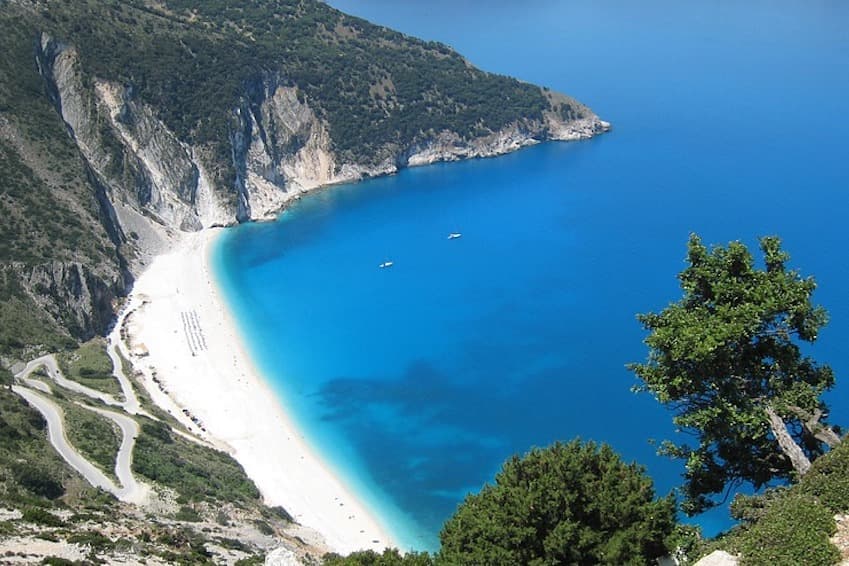 Louis de Bernières novel is based around true war crimes that took place in 1943 on the island, and both the novel and movie adaptation brought these to light in the public eye. The village of Sami was largely reconstructed for the movie, however you will find the beautiful beaches of Antisamos (where Nicolas Cage and the Italian army set up their tents), Argostoli and Fiscardo exactly as they appear on the screen. While on the island, you must also visit the most stunning beach of Kefalonia: Myrtos. This is featured in a scene where a World War I mine is washed up and detonated, on the mile and a half stretch of white pebbles that lead into sapphire water.

>>> Our villas in Kefalonia 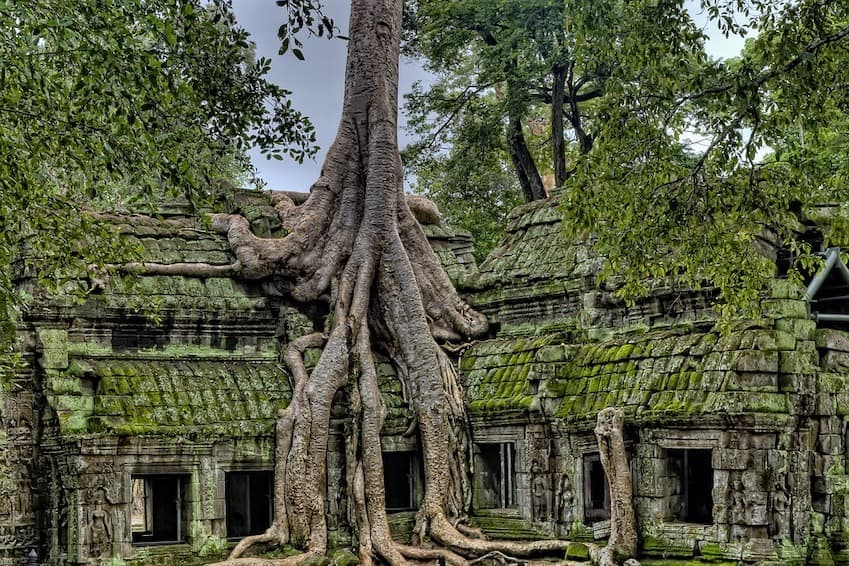 The iconic temples entwined in curling tree roots in Siem Reap are a magical sight, with so much history and culture surrounding the sites. Angkor Thom, meaning “Big City” (and it’s clear to see why with its 54 towers), is one of the famed locations where Angelina Jolie’s character arrives to retrieve half of the triangle. Ta Prohm is undoubtedly the most breathtaking of these structures, where the temple walls have been completely engulfed by the engorged tree roots in a domination of nature. Ta Prohm is approximately 3 km northeast of the main Angkor Wat complex, however if you are here you must explore as much of the beautiful area as possible: it is afterall the largest religious monument in the world, and a UNESCO World Heritage Site.

>>> Our villas in Siem Reap 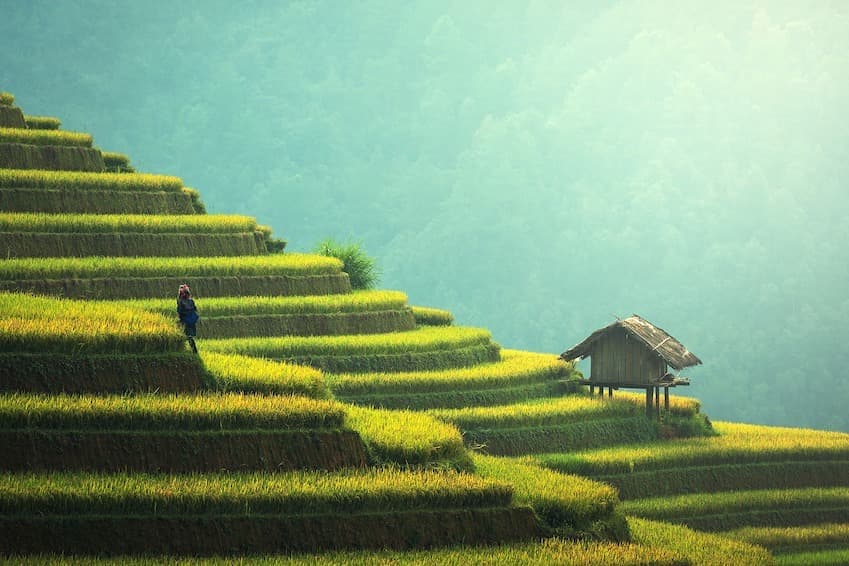 In this movie of self-discovery through various experiences around the world, Julia Roberts’ character finally lands in Bali. Some of the most notable and beautiful movie locations were in Ubud, including bike riding scenes through the breathtakingly Tegalalang Rice Terraces, and walks through the bustling Ubud Traditional Art Market. For a spectacular place to swim as the movie characters did, head to Padang Padang Beach, which is also one of Bali’s most popular surfing spots. It has a one hundred metre stretch of sand that you reach by steps that pass through a hollow rock entrance.